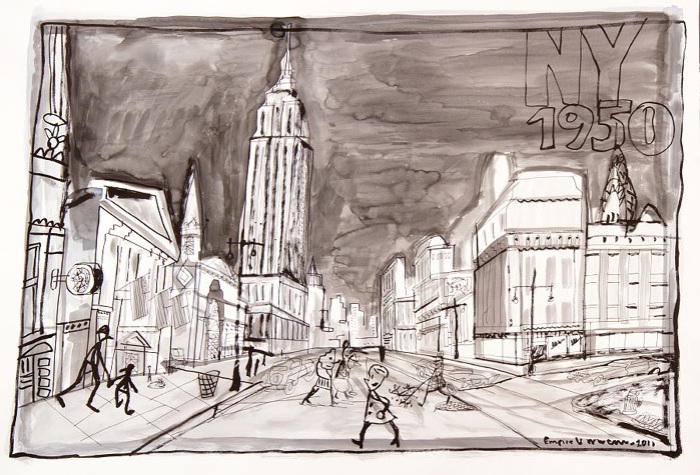 From the Arts Voyager Archives: Barcelona-born jack of all arts — notably, comics — Javier Mariscal, as featured at the Galerie Martel, the leading comics art gallery in Paris, and first covered on the DI/AV, in 2011. Image courtesy the Gallery Martel.

NEW YORK — Wednesday night, 8 o’clock. Our evening starts at the Old Heidelberg, dining with Martha Graham’s complice and legal heir Ron Protas, an accident that wasn’t an accident, because the setting, unplanned, will set the tone.  Once upon a time in New York there were more art critics of mettle who applied real writerly chops to art by artists who were more than clever, for whom technique was just a means and not an end, and who needed critics with chops to interpret the new art they were creating. One particular critic, John Leonard, started out as a novelist, beginning with “The Naked Martini,”  whose hero, Brian Kelly — another writer with New York City dreams created by a writer with New York City dreams — would wrap up a day of toil in the advertising houses of “the Lexington Avenue foothills” with a mug of dark beer, a kielbasa, and a proposal of marriage to the Old Heidelberg barmaid inevitably named Helga, swigging the cheap but hearty hops from his corner window table looking out (in the book) at York Avenue, somewhere around 86th. (Our waiter tells us the Heidelberg has been at its current location, 2nd just below 86th, since 1963; before that it was somewhere on or around 86th; Leonard’s book was published in 1965.) So when the pitcher-sized ‘mug’ of dark beer arrives, I propose a toast to John Leonard, his ghost still sitting in the corner, but it might as well be a lament, a dirge for a city of ghosts, where visual art by dead artists is usually more interesting than that created by the artists who can still afford to live in Michael Bloomberg’s New York Version 2.011, where we are told not to worry that the rent stabilization laws just expired, the last barrier to the complete Bobo-ization of New York crumbling with little sounding of the alarm.

To receive the complete article, first published on June 18, 2011, including more art, subscribers please contact publisher Paul Ben-Itzak at paulbenitzak@gmail.com. Not a subscriber? Subscribe to the Dance Insider & Arts Voyager for just $29.95/year ($99 for institutions gets full access for all your teachers, students, dance company members, etc.) by designating your PayPal payment in that amount to paulbenitzak@gmail.com, or write us at that address to learn how to pay by check. Subscribers receive full access to the DI/AV Archive of 2,000 exclusive reviews by 150 leading critics of performances and art on five continents from 1998 through 2015. You can also purchase a complete copy of the Archives for just $49 (individuals) or $109 (institutions) Contact Paul at paulbenitzak@gmail.com.