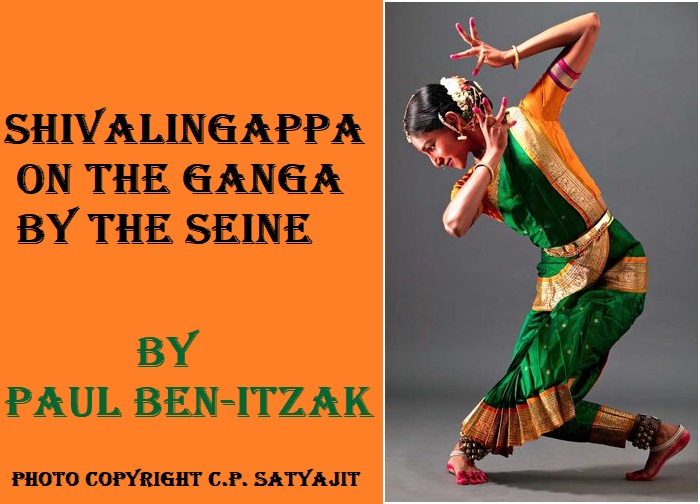 Among the many losses the Paris dance scene suffered with the departure and then death of Gerard Violette was the long-time Theatre de la Ville – Sarah Bernhardt director’s commitment to a multitude of Indian (and Pakistani) forms of music and dance. (A commitment to world dance that has since been replaced at the theatre Violette lead or co-lead for 40 years by the self-hating aesthetic of the Centre National de la Danse which Violette’s successor relies on for his dance programming, and which leaves little room for authentic, non-ironic world forms, notably from the Indian sub-continent and Spain.) Sol Hurok had nothing on Gerard Violette. Typical of that programming was this concert by the virtuosa Shantala Shivalingappa (and friends), first reviewed on the DI on October 28, 2004. To read about another Indian choreographer, the late Ranjabati Sircar, more in the traditional – contemporary veine — click here. Today’s re-publication is sponsored by Freespace Dance.

PARIS — I don’t know about your Tuesday night, but mine started with the Belgian man from Gent singing from the piano inside his open van on the Place des Abbesses in the heart of Montmartre and ended with a coked-up man from who know’s where chasing me down a dark street above the Moulin Rouge to the upper reaches of the rue des Martyrs (tracing the route Van Gogh once took to hawk his “Potato Peelers” to the Goupil Gallery on the Grands Boulevards), where I began to feel like one. In between there was Shantala Shivalingappa at the Theatre de la Ville aux Abbesses, an Indian dancer in the Kuchipudi mode intent on giving thanks for the simple blessings still ours for the asking even as the world hovers on the precipice.

I’d been avoiding concerts in the traditional Indian mode, not because they aren’t my cup of tea (especially if it’s chai tea!) but because I don’t feel my training as a critic matches these artists’ training in the various forms that come from that country. I am but a pauper babbling feeble prayers at their temple. I made an exception in the case of Shivalingappa because she had knocked my socks off in Pina Bausch’s “Nefes” (“Breath”). In addition to the precision and articulation in her fingers, which we know from other Indian forms, Shivalingappa added — in her Tanztheater Wuppertal appearance — flight.

This also turns out to be the case in the Paris premiere of “Shiva Ganga,” an evening of choreography in the Kuchipudi school or style, accompanied by live music. (Most of the choreography is by Shivalingappa, except for the opening sun worship, by Master Vempati Chinna Satyam, and a dance inspired by the god Ganesha by Kishore Mosalikanti.) Landing on plié — ouch! — or ending the evening simply spinning lyrically, back and head hunched, in a small circle — she is feather light.

But what stands out in “Shiva Ganga” is the mutual respect and relationship between music and dance. Much as in a flamenco concert, the most intriguing dynamic going on here is not necessarily the one confined to the dancer-choreographer’s body, but the one circulating between her and the ensemble of five musicians, including two soloist singers, a flautist, a percussionist and someone (like his instrument, unidentified in the program as far as I could see) on a string-like instrument that produced the underlying drone.

By far the heart of the evening, rhythmically, musically, and choreographically arrives with the extended play “Talamelam.” If you’ve listened to UK- based Indian fusion artist and pop star Sheila Chandra — specifically, “Speaking in Tongues I” and “Speaking in Tongues II” from “Weaving My Ancestors’ Voices” on Real World — or seen Sean Curran’s 1999 “Symbolic Logic,” set to remixes of the Chandra recordings, you’re familiar with the type of rhythm excursion this dance diva and her collaborators take us on. In fact, as Chandra points out in her liner notes, the sound and syllables of the musical composition relate not just to the mrdingam and tabla instruments, but “draw upon the patterns of rhythm used in South Indian dance.”

In her program notes for the evening’s musical and choreographic riff on this theme, Shivalingappa explains, “If melody is the body of Indian music, rhythm is its heart. In India, one says: ‘Melody is the mother, and rhythm is the father’ of the music. It’s the same for dance. The rhythmic system, tala, is an independent discipline, with a complex and subtle technique, finely developed. In effect, the innate mathematical sense of the Indian spirit endows it with a great rigor.”

All forms of classical Indian dance have pursued the tala rhythm, each developing its own personal language, Shivalingappa elaborates. For the form she’s schooled in — Kuchipudi — these investigations take the form of rhythmic variations in the voice and on the percussion instruments, a game or conversation in the rhythmic language, and a conversation which finishes with a dialogue between the dancer and the mrdingam player. Or, as she puts it, “The beating of the feet respond to the virtuosity of the fingers.” This conversation gives the dancer the opportunity to demonstrate the different positions of the Kuchipudi form.

“Talamelam,” the segment in “Shiva Ganga” which features this conversation, begins with a musical section created and directed by Savitry Nair and navigated by the rhythmic creations of B.P. Haribabu. Like the vowels between the consonants that book-ended his emissions, this pure music section was elongated — not just a musical introduction to a dance but a work of virtuosity in its own right. When Shivalingappa enters, the responses in her feet — as elsewhere in the program — demonstrate that for this form, all muscles and landing surfaces of the feet are called into service. Sometimes she balances on the balls, sometimes on the toes; sometimes her feet are simply flat. At other junctures, she arches both feet while maintaining the balls and toes on the ground, then bending at the waist and looking up mischievously at the musicians. In fact, it’s this personal regard — toward her collaborators in this section, and in winking asides to the audience throughout the program — that make dance like this such a tonic in a European environment too-often dominated by disinterested post-modern dance in which the performers seem to try to make like they don’t know the audience is there.

Before I saw this dance, I was impressed by the musicality of Curran’s effort to the similar Chandra chants, but there’s a difference between dancing on the surface of the music and engaging its soul and burrowing into its sonic meaning, and Shivalingappa and the musicians taught me that.

The only miss, for me, came later, when Shivalingappa squeezed her feet into and balanced on a wobbly disk-shaped basket at center stage; the awkward way in which she shuffled it forward was the one note lacking grace in the entire evening, a ‘prop’ dance we could have done without.