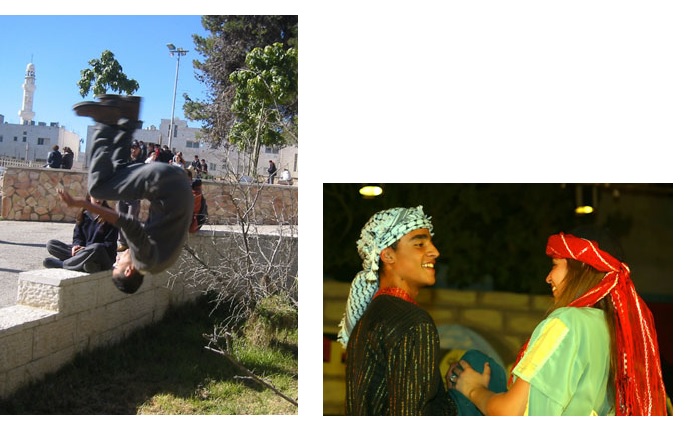 (Originally published on March 29, 2007.  For an update on Omar Barghouti, check today’s broadcast of Democracy Now.)

RAMALLAH, Palestine — Anyone who attends a performance by the El-Funoun Palestinian Dance Troupe cannot miss his outstanding stage presence — and not only because of his revealing eyes, distinguished height, olive complexion, and charming smile. Above everything else, Sharaf DarZaid captivates audiences with his exceptional ability to dance as if playing the music with his entire body… and soul; it’s as if the music has possessed him or, rather, as if he has possessed it, with skill, with distinctive talent, with passion.

Sharaf, with whom I’ve worked as trainer and choreographer for El-Funoun, was named after Sharaf at-Tibi, the first student martyr at Birzeit University, near the West Bank city of Ramallah. He grew up in a warm, caring family that cherishes Arab-Palestinian folk dance and music. During the 1948 Nakba, when more than 750,000 Palestinians were displaced and became refugees, Sharaf DarZaid’s family was uprooted from Beit Nabala, a village near Lydda. (Click here to read more about the Nakba.) Unlike the more than 400 villages that, by some accounts, were bulldozed by Israel at the time, Beit Nabala was spared — at least temporarily. The DarZaids and their fellow villagers paid regular, clandestine visits to their abandoned homes to recover whatever items they held dear. Sharaf’s great-grandfather, for instance, wanted more than anything else to retrieve his radio, one of only two in the entire village. In 1952, four years after the end of the war, Beit Nabala, along with other villages, was completely destroyed, effectively preventing refugees from returning and reclaiming their lands and possessions. As a twist of fate, the ruins of Beit Nabala later buzzed with airplanes flying from Israel’s main airport, which occupied part of its land, while one of the village’s sons, Sharaf, learned to fly in other ways — dancing!

Abruptly and violently cut off from their roots, their homes and their olive groves, the DarZaids settled in Ramallah, occupied by Israel since 1967, and had to start over. Ironically, their crushing sense of loss, injustice and devastation as refugees fuelled their sense of identity and triggered in them an inextinguishable desire for self-realization, for assertion of their humanity. Longing to return home was thus transformed from passive nostalgia into active energy, enhancing their self-esteem and transforming them from mere victims to conscious, self-determined subjects.

Sharaf’s father became a respected mathematics teacher in one of Ramallah’s elite schools; his mother graduated from Al-Quds Open University with a B.A. in social work. Together, they raised four special children, nourishing in them a profound awareness of their identity, a simple dream to become whole again, and a tenacious quest for freedom, equality and dignity. It is this particularly stimulating environment that nurtured in Sharaf his initial reverence for dance. Through dance, he narrated his innermost dreams; he counselled his tensions and fears; and he expressed his resistance to oppression, whether political or social.

Before becoming a dancer, Sharaf, like many Palestinian kids his age, growing up under the oppressive reality of colonial rule, felt a burning urge to participate in protest demonstrations against the Occupation. Only thus did he feel empowered… and free. Free to make his own decisions. Free to shout his guts out. Free to exercise his will in standing up to an overwhelmingly frightful foe. Free to prove to himself — and to his peers — that he would no longer accept the role of powerless victim.

Eventually, and after a struggle of sorts to convince him to quit the protests, Sharaf’s gravely concerned father convinced him to join his school’s traditional dance, or dabke group. (Dabke is a folkloric line dance characteristic of Arabs in the eastern Mediterranean region. It is based mostly on strong, lively and weighted stomps on the ground.) This did not deter him, however, from pursuing his street struggle. Sharaf, after all, has a natural inclination to be stubborn! Then talent and fate interfered. During the group’s first full performance, when he was just 15, Sharaf displayed all his exhilaration and flare, winning wide recognition as a dazzling performer, despite his then relatively diminutive figure. His father later told me that what touched him the most was “how Sharaf kept his head up all the time.” I was deeply impressed, too, but for more reasons. After consulting with my colleagues, I invited Sharaf to become a member of El-Funoun, Palestine’s leading dance company, enticing him by saying, “We shall waive the required audition for you to join!”

In El-Funoun’s youth group, Sharaf’s skills were sharpened and his talent matured. Even his size underwent a dramatic change: he became a tall and handsome — though still slim — young man. Ultimately, Sharaf managed to reconcile his patriotic motives and unrelenting youthful bravado with what he perceived as a new, equally needed form of resistance: dance.

After he grew up to join El-Funoun’s adult group, Sharaf bumped into a new style of dance that not only tried his talent but also challenged his artistic taste. El-Funoun was — and still is — experimenting with what it terms contemporary Palestinian dance, a genre inspired by and rooted in Arab folk dance, but in dialogue with universal techniques and influences, including several Western forms. Sharaf’s visible irritation with this ostensibly alienating and unfamiliar contemporary movement terrain soon gave way to an unwavering resolve to absorb the new forms with diligence, persistence and, crucially, patience. With such determination, it wasn’t long before Sharaf proved himself in this more modern realm, too, as a virtuoso to be reckoned with. Still, his true love was for dabke.

My first encounter as a choreographer with Sharaf came when I created a flirtatious courting dance that included a relatively daring duet for which I selected him and a vivacious female dancer, Laila Boukhari. Both Sharaf and Laila, as well as the rest of the young dancers, had difficulty learning several parts of the larger dance. But, with the duet, things went unpredictably smoother! The two were asked to touch each other by their foreheads; turn, while still in contact; and then rest their heads on each other’s shoulders. Admittedly, I intended this moment to capture the audience’s undivided attention and to slightly push the limits of what is acceptable, or tolerable, for an average Palestinian spectator. To my utter surprise, Sharaf and Laila nailed the movement, showed brilliant chemistry, and perfected the required expressive content in just one rehearsal. Later, during performances, I was stunned that all the whistling, cheering and applause this intimate moment inevitably generated among audiences never loosened the couple’s focus or distracted their fixed gaze in each other’s eyes. After some time, I was embarrassed to learn that I was the only one in El-Funoun who did not know that the two had been infatuated with each other for quite some time!

Besides being one of the main dancers — all are volunteers — of El-Funoun, Sharaf, who is now 19, is a student of finance at Birzeit University. He also teaches dabke to youth in Saffa — a small, picturesque village to the west of Ramallah — as part of a program organized by the Popular Art Centre, a leading community arts organization, in cooperation with El-Funoun. When I saw the Saffa group, Handala, perform last year, I was moved primarily by how the young novices respected what they were doing. They took themselves seriously, without losing their spontaneity and authentic character. They looked up to Sharaf, who is practically their age, as a role model, particularly because he developed a remarkable way of reaching their minds and hearts, without undermining the significance of the process of creating dance. Sharaf’s own respect for dance and for communicating through dance was a source of inspiration for them. Although he may lose himself in dancing, as if bypassing the stage, the audience, and all the boundaries to reach the sky, Sharaf never loses his grip on the music or movement.

Stirred by Sharaf’s budding talent, and feeling that perhaps I can contribute, even modestly, to his professional development as a dancer, I decided to choreograph a dance based on his biography and that of his namesake. I called it “Sharaf,” which has a nice connotation and ring in Arabic. When he first performed the piece before a packed theater in Ramallah last December, many in the 800-strong audience were mesmerized by his agility, versatility, and the complex mix of emotions Sharaf seamlessly exuded: bereavement, exuberance, separation, love, phobia, defiance, vulnerability, hope, and, of course, honor. His exceptional sense of musicality and rhythm helped him express this amalgam of conflicting themes with skill and a degree of self-confidence that is rare for his age group. “Breathtaking” was a common response from quite a few to this demanding seven-minute performance. Frank Weigand, a visiting German dance critic, told me, “Sharaf… could carry the whole performance only by his presence. He is a dancer with a big potential — and I think that he could become a very complex and multifaceted performer.”

Of all the touching moments in “Sharaf,” nothing quite strikes me as much as when Sharaf jumps so high that it’s as if he’s flying, soaring above all the wounds, the phobias, the injustices, and the fetters, into the promising horizon.