The good news is that, taking a gander over to the press page of the Art Institute of Chicago web site, we found, above, Claude Monet’s 1877 oil painting “Arrival of the Normandy Train, Gare Saint-Lazare,” on view as part of the exhibition Monet and Chicago which opens September 5. The bad news is that the AIC press service (mis)contends that the maitre de Giverny (1840–1926) is “often referred to as the ‘Father of Impressionism.’” I hate to indulge in another flack attack — You know me, Al — but there are at least two things wrong with this statement: 1) It suggests that the press service takes its audience for idiots who can’t tell Monet from Manet unless they employ a qualifying adjective even if it’s erroneous, and 2) Monet was not the father of Impressionism, but rather one of its most successful initial proponents, his painting “Impression of the Sunset” giving its *name* to the style. If the school had any fathers, they were Eugene Delacroix and Camille Corot, the latter of whom set the example in his ‘pleine air’ capturing of the rustling of leaves in the wind and refracted and reflected light on water, and gave both Camille Pissarro (the movement’s father figure, to borrow a term from the late George Michael) and Berthe Morisot (who could make a good case for being its mother) their first Paris lessons in color values. (At his studio on what is now called the rue de Paradis, across the street from where we lived 140 years later.) With Emile Zola — with whose “The Human Animal” Monet’s tableau above should be looked at in tandem — as a sort of godfather, and his grandest artistic cause Edouard Manet (Morisot’s brother-in-law) as an uncle. Painting from the collection of the Art Institute of Chicago, Mr. and Mrs. Martin A. Ryerson Collection. — PB-I 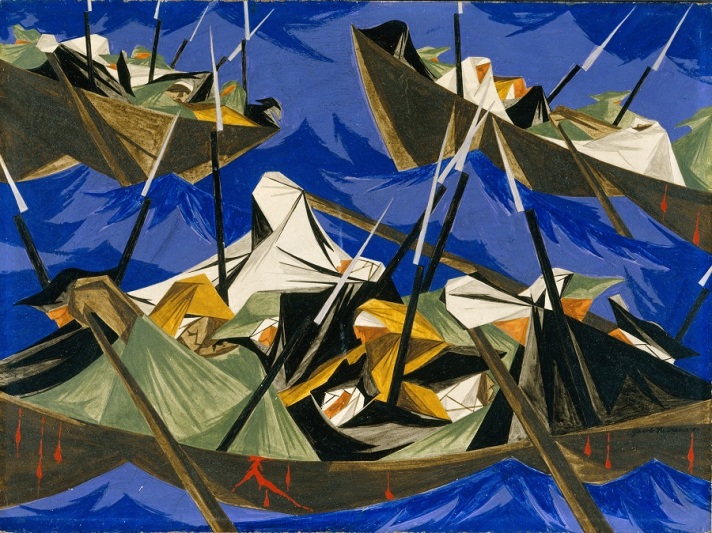 The post-Corona world — using the qualification ‘post’ guardedly, that horizon seeming distant, particularly in the United States — seems to be shaping up into two camps: Those who want to return to business as usual, and those who recognize that circumstances have changed forever, and that our comportment has got to change with it. If there’s nothing unusual about the protective measures the Metropolitan Museum has promised to take when it re-opens its doors August 29 after a five-month closure — it’s not the only institution to require masks, limit admissions, disinfect regularly and provide sanitizing stations — what is exceptional is that the 150-year-old New York City institution has not rested at ‘assurance’ but upped the ante to justification, recognizing that the stakes have changed.

That recognition comes in the form of the new exhibition Jacob Lawrence: the American Struggle, highlighting the American modern painter’s multi-paneled series Struggle … From the History of the American People (1954–56).

For in the United States, as if it was not already enough that their community, along with those of Latinos, Native Americans and Alaskans (where the tiny Bush village of Northway last week experienced its first cases), prisoners (1000 cases in San Quentin alone), and detained migrants (3,000 cases at last count), has been particularly hard-hit, the virus-cide of Corona has been joined by a stepped-up, government-institution (police; not all, obviously) generated genocide of African-Americans. If not in scale, the term genocide is justified in nature, as the underpinning dehumanization is the same here as that that enabled the European genocide of Jews and the Rwanda genocide.

Given that they often lionize white conquerors and conquistadors, enslavers and murderers, the toppling of statues (in highly symbolic places) by these oppressed groups and their sympathizers has been understandable.

The problem with this approach, however, is that one can’t just erase history by demolishing its monuments.

I prefer the approach suggested by no less than Angela Davis, the Black Power pioneer and philosopher who, in a recent interview with Amy Goodman of Democracy Now, suggested these monuments should not necessarily be destroyed, but moved (from public places, e.g. State-houses, where they suggest their racist values still prime) to museums… where they can be viewed in a “pedagogic” context.

What I love about the Met’s Lawrence exhibition is that it refutes a spurious suggestion made recently by a European president who indirectly implied that those who would “unbolt” statues (he confounded “unbolt” with “destroy,” making the same mistake as those who destroyed Courbet, who, as the artistic commissar during the Paris Commune of 1871, simply wanted to move, not destroy, the statue at the Place Vendome, as demonstrated by Michel Ragon in “Courbet, Painter of Freedom”), or demand that their country live up to its principles, are “separatists.”

Whether in Europe or on the other side of the Atlantic, these demonstrators don’t want to ‘destroy’ and they are not separatists but, as former French justice minister Christine Taubira pointed out, inclusionists. They want to claim the rights that their countries’ constitutions accord them, and to belong to those countries’ histories..

From the Arts Voyager archive and the 2012 exhibtion “To see as artists see: American Art from the Phillips Collection,” at the Amon Carter Museum of American Art in Fort Worth, Texas: Jacob Lawrence (1917 – 2000), “The Migration Series, Panel no. 3: From every southern town migrants left by the hundreds to travel north,” 1940 – 41. Casein tempera on hardboard. ©2011 the Jacob and Gwendolyn Lawrence Foundation, Seattle / Artists Rights Society (ARS), New York. Acquired 1942, The Phillips Collection, Washington, D.C. .

Lawrence has certainly distinguished himself as a chronicler of African-Americans’ particular history, notably in the “Migration” series. (Ironically, in the current context, depicting Blacks fleeing the South to seek work in the north, notably Chicago, where contemporary Blacks seem to have targets on their backs that make the Plantation persecution seem like a picnic.)

Here, by taking ownership of no less a nation-making chapter than (slave-holder) Washington’s crossing of the Delaware, Lawrence moves beyond celebrating his own ‘tribe”s history to staking a claim in the larger, national story.

The Met also moves beyond the revisionist, overly race-conscious cultural history that’s been in vogue at U.S. museal and academic institutions for several years now (typified by Huey Copeland and the Art History department at Northwestern University, and its affiliated museum) to a curatorial statement that recognizes that an ‘equal regard’ doesn’t just mean trotting out racialist exhibitions, but really doing the work — race-blind — to scout out artistically equal visions from across the spectrum.

Following the viral popularity of yesterday’s posting  of the first of Morris Engel’s 1949 gelatin silver prints, “Buda, Texas. Dairy Farmer-Rylander Family” from the exhibition Looking In: Photography from the Outside, theoretically on view through July 5 at the Amon Carter Museum of American Art in Fort Worth, Texas, we thought we’d make another visit to the Rylander family, as immortalized by Engel in the same series and on view at the same exhibition. Amon Carter Museum of American Art, Fort Worth, Texas. 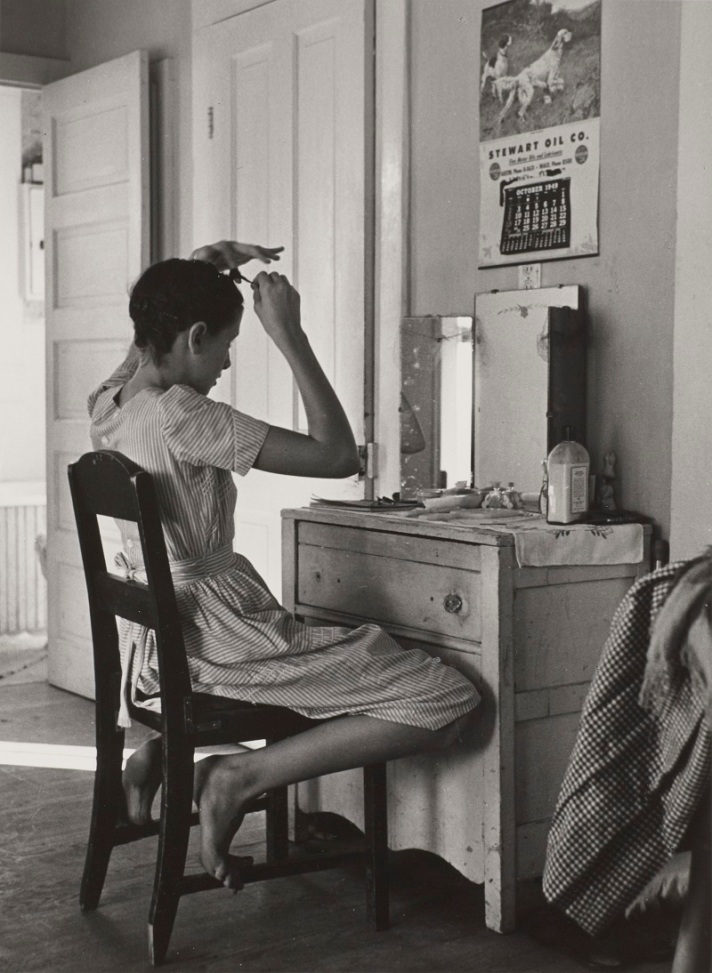 From the exhibition Looking In: Photography from the Outside, theoretically on view through July 5 at the Amon Carter Museum of American Art in Fort Worth, Texas: Morris Engel (1918–2005), “Buda, Texas. Dairy Farmer—Rylander Family,” 1949. Gelatin silver print. Amon Carter Museum of American Art, Fort Worth, Texas. © 1980 Morris Engel. Note all the squares and rectangles and which, when they interrupt them, focus the eye on the young woman’s strong calf, elegant foot, and taut toes. Note also the resemblance to the stance of another young worker, the model (his sister) in Gustave Courbet’s 1855 oil painting “The Wheat Sifters,” in the collection of the Fine Arts Museum of Nantes, France.

Earlier this month, the U.S. Postal Service announced it was issuing a stamp series honoring artist, educator, and Japanese-American concentration camp survivor Ruth Asawa (1926-2013). This piece, “Ruth Asawa: From darkness into light,” was first published on the Arts Voyager on August 14, 2012, and dedicated to Annette, Eva, Sharon, Leah, and all the other parents who with Ruth founded San Francisco’s Alvarado Arts Program in the 1960s. I was one of Ruth’s students, and was later honored, upon graduation from Mission High School, to receive the Ruth Asawa Achievement Award. Special thanks to L.R. for the tip. We’ll make a reporter out of you yet, Lulu. Like what you’re reading? Please help pay for our work — and increased food expenses and risk during this crisis — by subscribing or making a donation today. Just designate your payment in dollars or Euros through PayPal to paulbenitzak@gmail.com , or write us at that address to learn how to donate by check through the mail.

PERRYVILLE, Maryland — Lafayette, when he traversed it on General Washington’s orders, called the mighty Susquehanna River his “rubicom.” This morning as the Sun rises over this vast blue reflecting pool right near where it opens up into the Chesapeake Bay, and I reflect on how a kid from San Francisco’s Noe Valley got here, at the tail end of a three-month arts voyage and personal journey that now finds me in a house where Lafayette ‘lui-meme’ slept, owned by another kid from SF (neighboring Eureka Valley) and her husband, I find myself thinking of Ruth Asawa, who from a childhood interned in a prison camp by her own country (is this what Lafayette and Washington fought for?) went on to turn thousands of kids like me and my pal on to art. I think of art and I think of humility, I think of museums and I think of access. 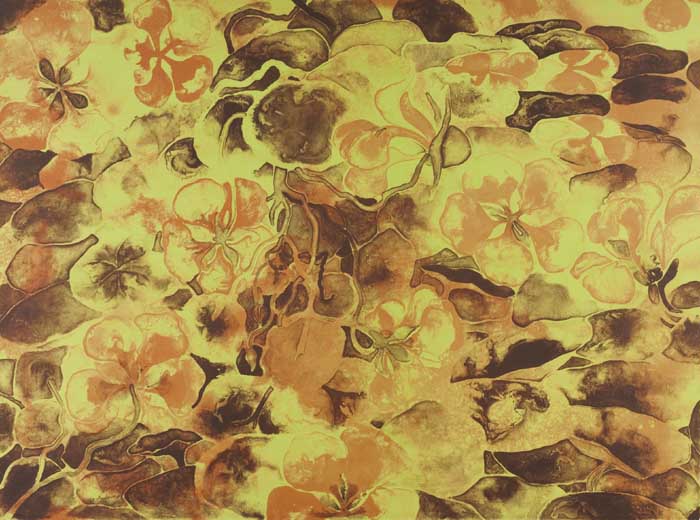 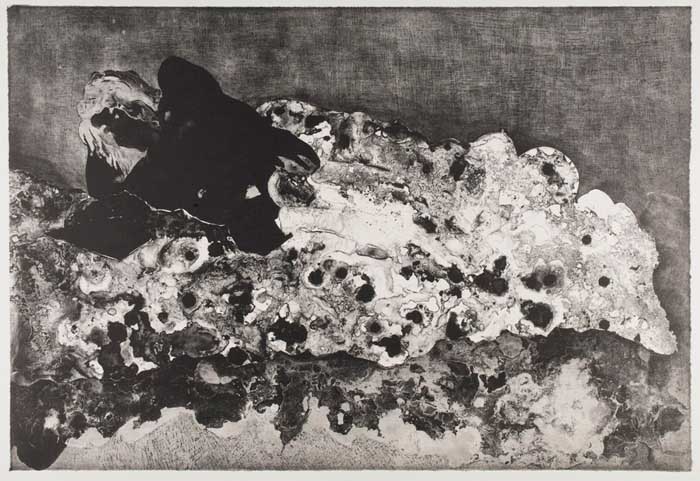